Named in Frank’s honor, the award was created in 2019 to acknowledge and celebrate a community member who exemplifies positivity, selflessness, leadership and inspires others to give back to the community. 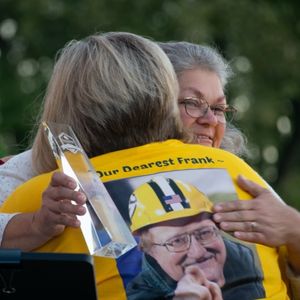 I don’t put myself in a class with Frank. He’s in a class all on his own. To be nominated for this award is humbling. I can honestly say that I love serving this community and am honored to have accepted this award.

As an award recipient, Madrigal was also gifted $1,000 to donate to a non-profit organization of her choice. As a long-time friend of Frank Lamping, Cary was motivated to donate her funds to the Go Frank Go Foundation, which was created to inspire local youth to be involved in their community and to “live like Frank”. At the event, Madrigal encouraged attendees to make a donation to support the foundation and she raised an additional $821.

“Cary is so deserving of this award. She dedicates so much of her time towards protecting and supporting our community. We’re very grateful she chose the Go Frank Go Foundation as her donation recipient,” said Foundation Board Member, Jason Callewaert.

Madrigal is a lifetime resident of Union Grove. She attended school in Union Grove and raised her three children in the same community. In 2001 Madrigal applied for an opportunity with the Racine County Sheriff’s Office and has now served as Deputy Sheriff to multiple divisions, Sensitive Crimes Investigator, Sergeant, Lieutenant, and currently as Captain.

“We’re honored to have presented this award to Cary. She is the epitome of ‘living like frank’...selfless, humble, and putting her community first. Thank you Cary for all that you do in our community and congratulations,” said CSB Senior Vice President and Market President, David Moyer.

In honor of Cary and her service in law enforcement, Community State Bank will fly the thin blue line flag at their Union Grove location during the month of October. Additionally, CSB will fly the flag in January during Law Enforcement Appreciation Month to honor all local law enforcement for their dedication to the community.

CSB is pleased to present a Gift2Giving donation to Habitat for Humanity Walworth County.